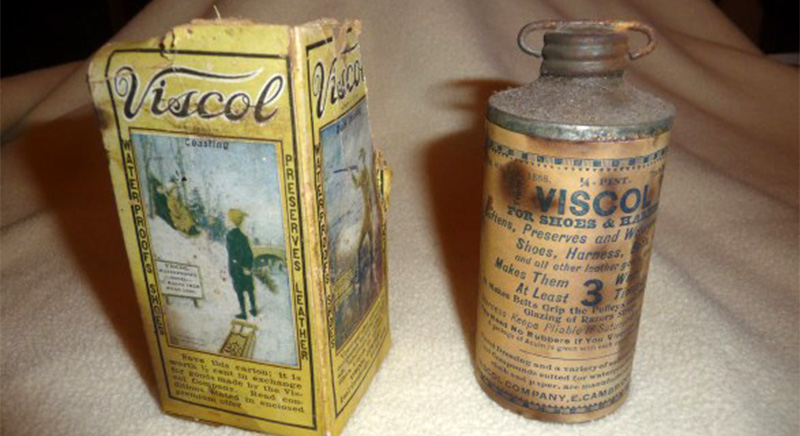 Republished with permission from the Cambridge Historical Commission, today’s guest Did you know? bloggers. 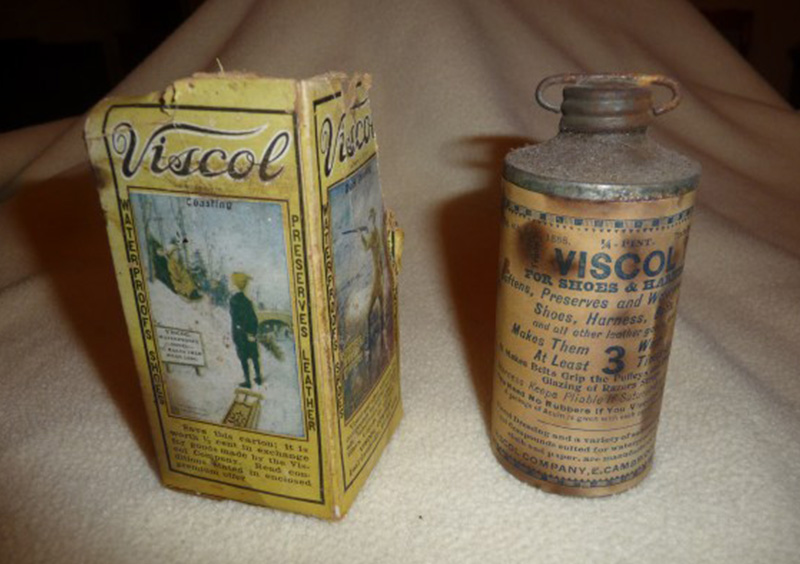 A box and a Viscol can. (Photo: Cambridge Historical Commission)

On Binney and First streets in East Cambridge, a man named Adolph Sommer lived and died for his business.

Sommer, born and trained as a chemist in Germany, later worked as a pharmacist in California, where he studied and then taught at the University of California at Berkeley. There he discovered the formula from which he made his main product, Viscol – registered in 1889 in the form of a liquid “leather grease” composed mainly of vegetable or animal oils and chloride or sulphur. The preparation was advertised in California as early as 1891 as “Viscol dressing”, used to soften, waterproof and preserve things such as boots, shoes, harnesses and belts.

Around 1890 Sommer moved to Cambridge and opened a small wooden factory in the rapidly developing industrial area of ​​East Cambridge, which would now be considered part of Kendall Square. For over 40 years the product was advertised nationwide under the “Viscol” brand name in shoe and leather magazines and Montgomery Ward catalogs; it was sold in small canisters to outlets for retail distribution, or in 5-gallon canisters and 50-gallon drums to tanneries for use in leather processing. The company needed more manufacturing space and employees, and it grew into a three-building complex along First Street. 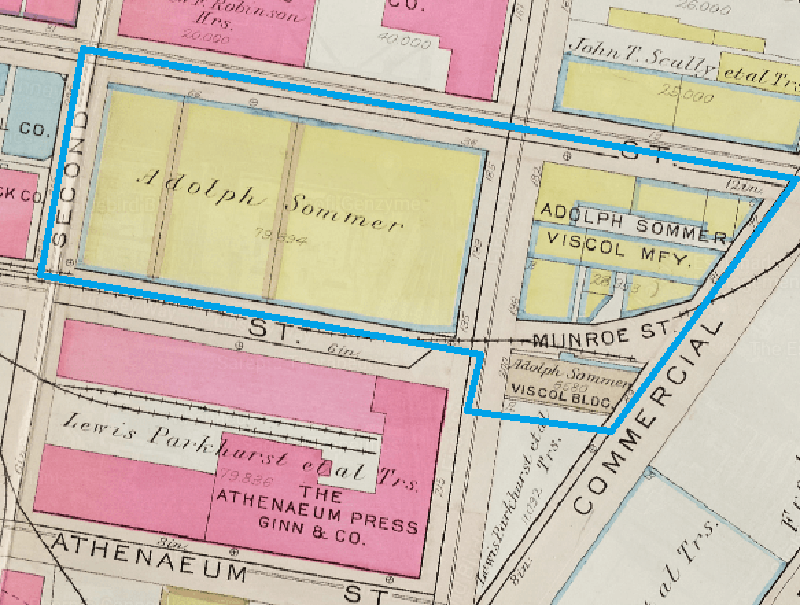 A 1930 atlas map shows the extent of the Viscol property in a blue outline.

Sommer lived alone – in his own manufacturing plant – and had no social connections. He was known as industrious, alert, lively, strong-willed and stubborn, working every day and never taking holidays or allowing his employees to take them. He also allowed no conversation or cooperation between his employees, but he was kind when they had financial difficulties, and many worked for him for decades. In 1922, when he was 71, Sommer married Emmeline Harnden, a 51-year-old widow who had worked in the factory for over 20 years. At the time, Sommer was looking for someone to take over his business; he generated a written contract with his new wife that upon his death, the company and all assets would go to his legal heirs, who, with the exception of his widow, were two children of a sister who died in Germany. 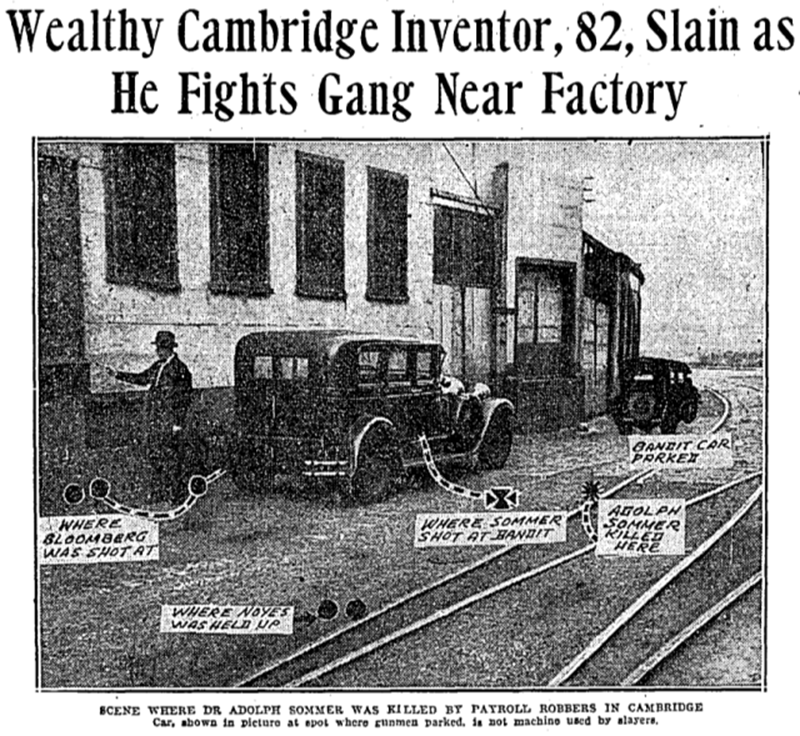 In October 1933, 82-year-old Sommer and his factory manager, Hans Bloomberg, collected more than $1,000 from Lechmere Bank on Cambridge Street before returning to the factory to pay workers. Upon arriving at the factory, five robbers with guns booby-trapped the car and demanded the money. A man pointed a gun at Sommer’s face. When he saw the gun, Sommer reportedly opened the driver’s side door and lunged at the robbers, retrieving his own gun from his pocket. As he rushed he was shot three times and died – but not before shooting one of the robbers, who fled in a car over the Prison Point bridge to Charlestown. 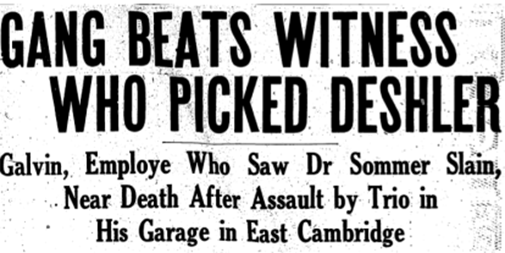 There were few leads, but a witness identified the shooter to Cambridge police as James Deshler. It was soon revealed to the public that the witness was Edward Galvin, of 22 Lambert St., in the Wellington-Harrington neighborhood, and less than a week after Deshler’s arrest, three men attacked Galvin in a parking lot, apparently in retaliation. They have never been identified. Two men were ultimately imprisoned for Sommer’s robbery and murder: Deshler and Marshall “Hickey” Bowles.

Sommers’ company and properties were sold in 1936 to Stamford Rubber Supply of Connecticut, which operated the business as one of its own departments until January 1937. The complex was used for other industrial purposes and storage until it was razed in the mid-1980s. 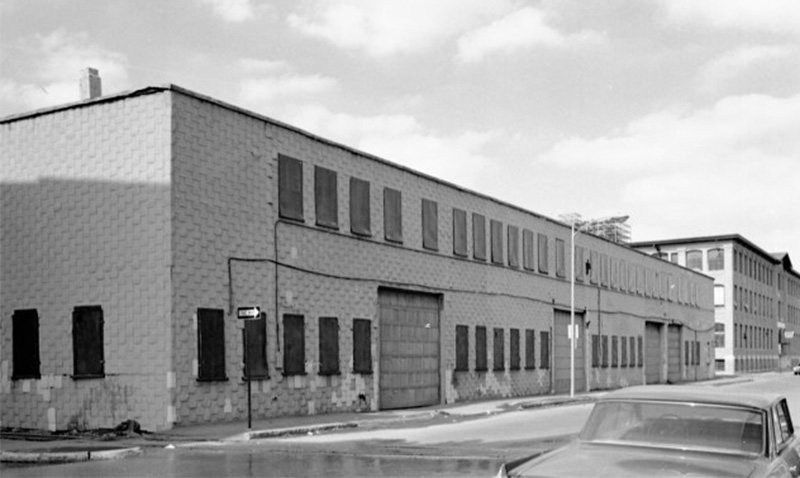 The 185 First St. complex, seen in 1970, was built for Adolph Sommer and Viscol Manufacturing in 1913 and razed in 1986. (Photo: Cambridge Historical Commission)

History Cambridge began in 1905 as the Cambridge Historical Society. Today we have a new name, a new look and a whole new mission.

We engage with our city to explore how the past influences the present to shape a better future. We strive to be Cambridge’s most relevant and responsive historical voice. To do this, we recognize that everyone in our city knows something about the history of Cambridge and that their knowledge is important. We help people share the story with each other – and weave their knowledge – by giving them the floor, the mic, the platform. We illuminate where historical perspectives are needed. We listen to our community. We live by the ideal that history belongs to everyone.

Our theme for 2022 is “How Does Cambridge Work?” » Make history with us at cambridgehistory.org.