Growing a high-risk crop such as rapeseed requires a reliable yet cost-effective method of planting the seeds in the ground.

On the one hand, factories need to get the best start possible, but with the risk of failure always present, this cannot be too costly and too time-consuming.

Will Mumford, a Cambridgeshire farmer and founder of precision farming specialist AS Communications, found himself faced with this dilemma.

For years he had used a conventional method of establishing the crop on his heavy clay soil, involving a Vaderstad Topdown and a few passes with a power harrow, before seeding with a Vaderstad Rapid.

It was a laborious and expensive technique, but it gave decent results. However, after having two consecutive bad harvests and a poor result the following year, he decided to switch to a once-through system.

His plan was to use a low-disturbance subsoiler to loosen the soil but, rather than scatter the seeds on the surface, to sow them precisely with a coulter.

At the same time, he wanted options for applying liquid starter fertilizer, seeding a companion crop in the inter-row, and applying slug pellets or sulfur pellets.

Because of his background in precision farming, he also wanted it to be Isobus controlled, with the ability to apply variable rates and produce application maps that could be loaded into his farm management software.

To bring this complex machine to life, he enlisted the services of Tom Carnell of Tramline Tec, who specializes in assembling electronic systems on agricultural machinery, as well as carrying out traditional manufacturing work (see “Tramline Tec” ). 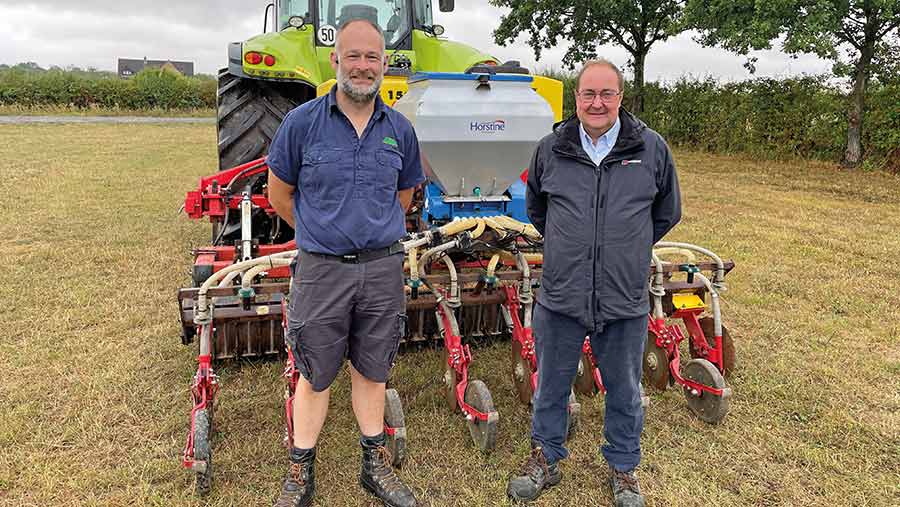 After years of working as an engineer in agriculture, food and pharmaceuticals, Tom Carnell started his own company called Tramline Tec in 2021.

Thanks to this, he specializes in the installation and modification of electronic systems on agricultural equipment, as well as in more traditional manufacturing.

Precision farming systems, Isobus and Canbus – things that give most people a cold sweat – are his bread and butter. This means it can upgrade older equipment to new standards, simplify complex controls to make them more user-friendly, and equip new machines.

As an agent for MC Electronics, he also installs many blockage sensors and seed counting systems on planters, especially John Deere’s 750A.

These alert the operator as soon as the flow begins to drop in one of the outlets, so blockages can be spotted before they cause a real problem.

The counting function also gives an accurate basis for planting seeds per square meter, rather than calculating the weight of a thousand grains.

Prices start at around £2000 for the ECU and accessories, with stall sensors costing around £130 each and numbering units around £150.

The starting point for the project was a 3.2m Quivogne Pluton subsoiler with six legs set at around 50cm.

It was wider than Mr Mumford likes to sow rapeseed on his clay soil, so Mr Carnell decided to add two more feet and reduce the spacing to 40cm.

To accomplish this, he designed mounting brackets using CAD that allowed the extra legs to be installed and spacing to be adjusted without having to cut or weld the frame.

In an effort to reduce ground heave and surface disturbance, the stock legs have been replaced with low disturbance alternatives from Pan Anglia.

The Pluto’s factory-fitted Flexi-Coil has also been replaced with a toothed roller after locking the solid on its first few rides.

For seed placement, they bought a set of Weaving double-disc coulters with integrated press wheels, six of which they managed to find used and two of which they had to buy new.

These were mounted on a bar at the rear of the packer roller – aligned with the subsoiling legs – which has a rotational adjustment to change the seeding depth.

With three solid products to apply, separate electro-pneumatic seeders were mounted on top of the frame.

A Horstine Proseed meters the rapeseed and transports it to the circular coulters, while an APV unit sends the seeds of associated crops to spreading plates mounted in the middle of the inter-row.

The other is routed to straight delivery tubes, which dump slug pellets or sulfur fertilizer just down the side of the crop row. 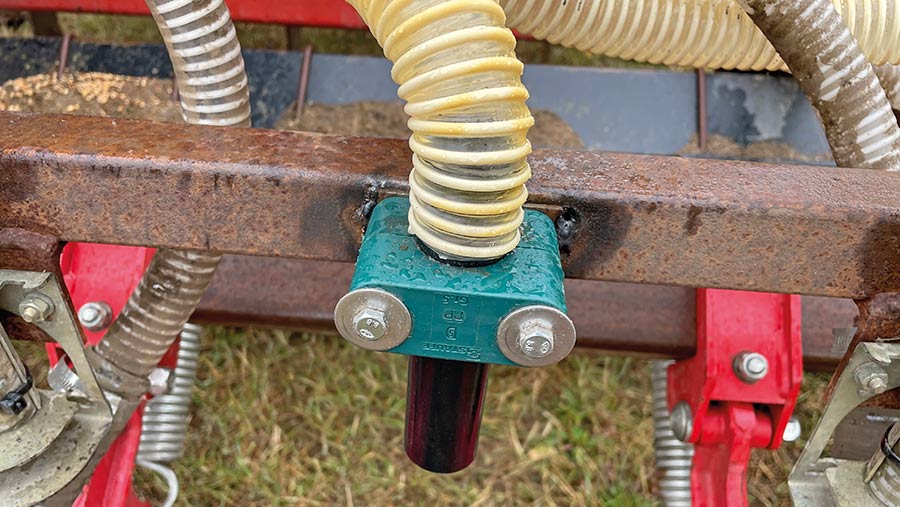 The final part of the setup is the liquid fertilizer system, which uses a Hardi 1250 liter front tank connected to pencil jets mounted on the back of the subsoiler legs.

These are set to place the fertilizer just below the seed, which means the roots can grab hold of them as soon as they start to grow. 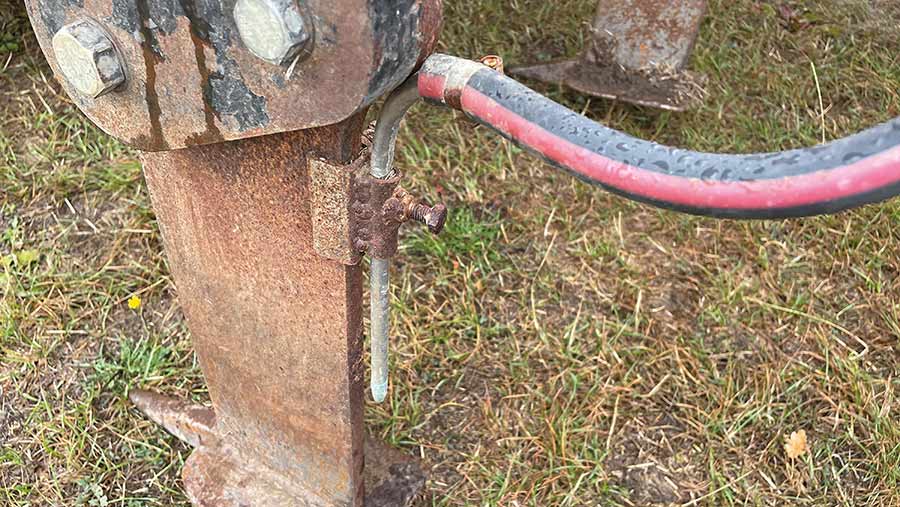 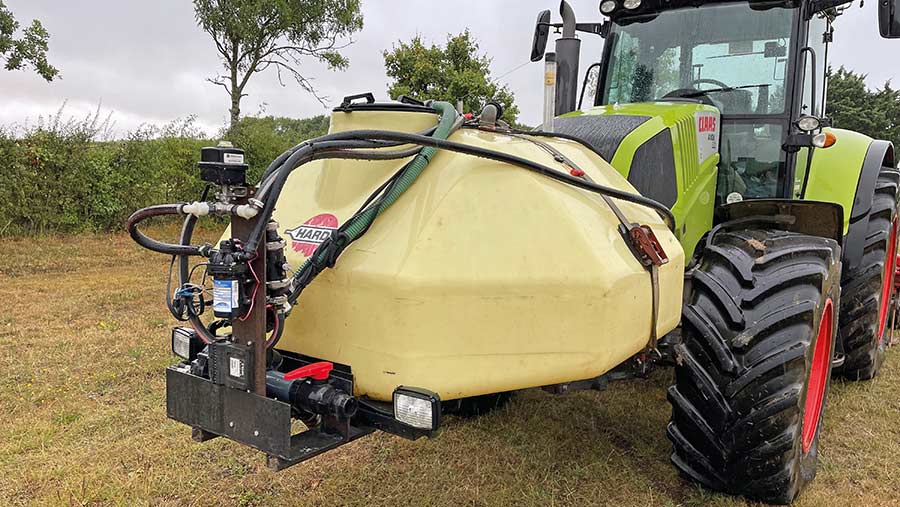 The electronics are what set this seeder apart from most other home-made seeders of this type.

Typically, small seed applicators come with their own simple control system, but Mr. Carnell got around that by connecting each unit’s drive motor and speed controller to a Muller Isobus ECU.

The result is that all three can be configured and monitored from a single Trimble GFX-750 display in the tractor cab. 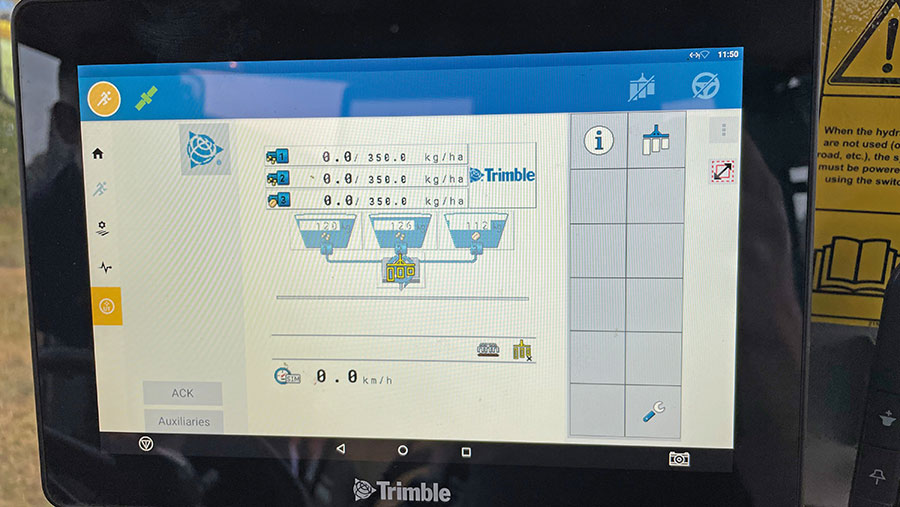 Thanks to the fact that the seed is dosed individually at each exit, these units give a more precise distribution than a conventional seed drill with a single distribution head.

The Horstine goes further than APV units, as it has a fixed displacement metering system that maintains accuracy at low seeding rates. This is why he was in charge of placing the rapeseed.

Liquid fertilizer is also monitored through the GFX-750 using a Raven flow meter and another Trimble system called Field IQ.

Using the Isobus configuration, all four products can be applied at varying rates and application maps can be generated, ready to be uploaded into farm management software for analysis.

On top of that, Mr. Carnell installed seed blockage and seed count sensors from MC Electronics.

As well as letting Mr. Mumford know if seeds are not coming out of one of the coulters, it tells him precisely how many seeds per square meter he is applying.

“I used to calculate it from the weight of a thousand grains, but it’s much more reliable using counter information,” he says. 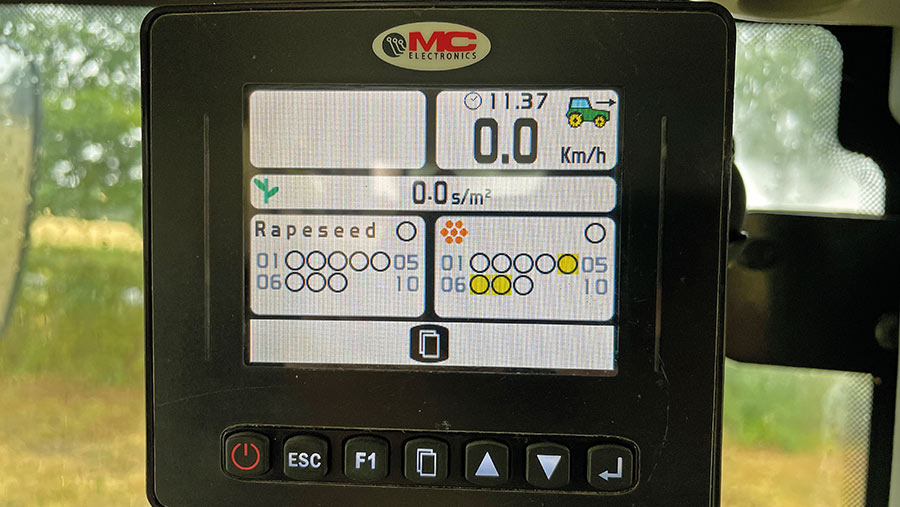 The drill is pulled by a 220hp Claas Axion 810 and, with the legs set to work at around 20cm deep, it has just enough power for the job.

Working speeds of up to 10 km/h are possible, but to avoid moving too much soil, they opt for a more sedate pace of 5-6 km/h, which gives a working rate of around 1 .7 ha/hour.

Fuel consumption is around 30 litres/hour, less than a third of the amount used when Mr Mumford was making multiple crop passes and planting with his Vaderstad Rapid.

The seed drill was completed and ready for planting rapeseed in late August/early September 2021, which has established itself well.

However, one of the later drilled fields was obliterated by flea beetles. “We started seeing damage on a Thursday and by Sunday the whole crop was gone,” says Mr Mumford. 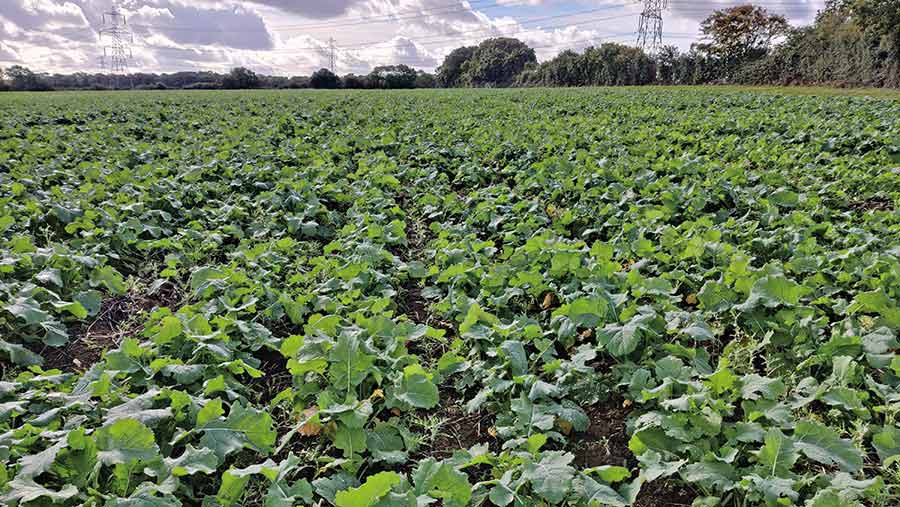 “It would have been a big loss under the old system, but with our lower labor and establishment costs, it wasn’t that hard to bear – we re-drilled on September 23, when the flea beetle calmed down, and it ended up being one of our most productive fields.

Crops planted with the drill yielded an average of almost 5 t/ha, with only one crop suffering heavy pigeon damage reaching around 2.9 t.

“It was a good year for rapeseed in general, but the drill helped it get off to a good start, especially where we put nitrogen in with the seed,” says Mumford.

Despite its success, the drill should receive some modifications. The first of these will be to replace the Weaving double disc coulters with something more robust.

“They did well last year as the ground was soft, but because they are designed to work in a cultivated seedbed the coulter pressure is usually not high enough to work directly behind a sub- soleur,” Mr. Carnell explains.

In an effort to find a suitable replacement, he did some seed placement trials with Bourgault, JJ Metcalfe and Vaderstad Rapid discs.

These gave the most consistent results, and with their strong rubber backings, they could put a lot of pressure on hard floors. 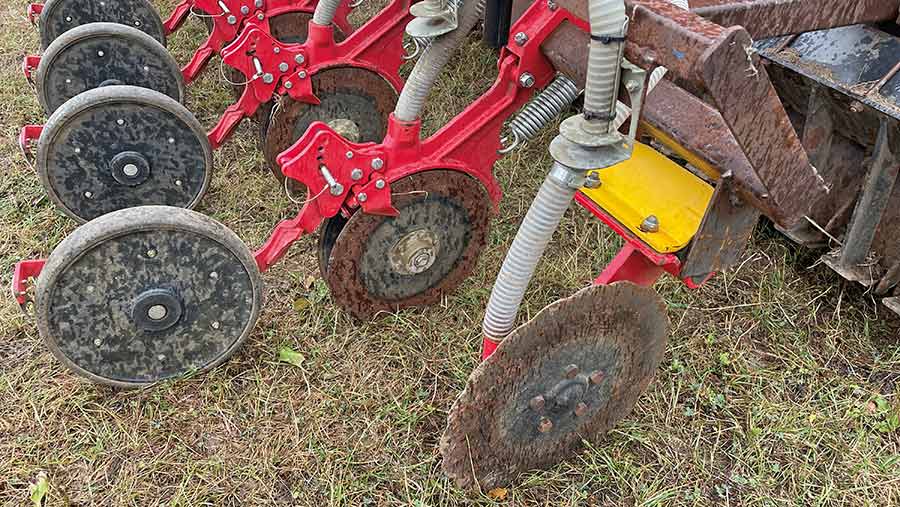 To find out if it’s worth upgrading, Mr Mumford will run the drill with a Vaderstad disc fitted alongside the weaving units this season.

If it proves successful, he will look to get a used set of coulters and recondition them, as new assemblies are very expensive. Individual rear press wheels can also be added to help close the slot and consolidate the seedbed.

To alert the operator to any blockages in the liquid fertilizer system, Carnell adds a simple John Blue mechanical rate controller.

This features a series of weighted balls suspended in a tube, which should rest in the center at normal operating pressure.

If there is a blockage, these will fall out, giving a clear visual clue that something is wrong. 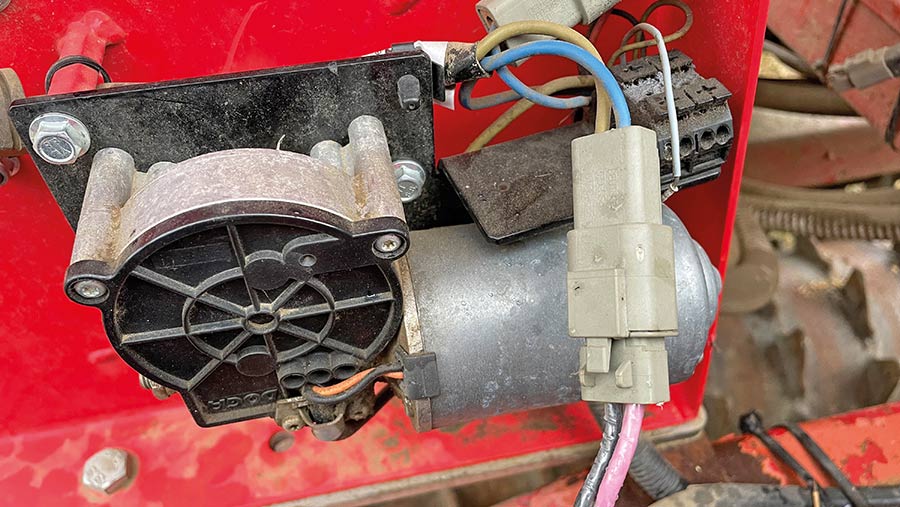 Once the final design is perfected, the drill will be disassembled and rebuilt with a factory level finish. There are also plans to build other examples, which will be sold under the Carford brand.

For this season, Mr. Mumford plans to make full use of the drill’s functionality.

This includes applying variable rate slug pellets – if needed – with higher rates in areas that are known hotspots.

He will also experiment with cover crops such as buckwheat in the inter-row, in the hope that they will reduce flea beetle pressure.