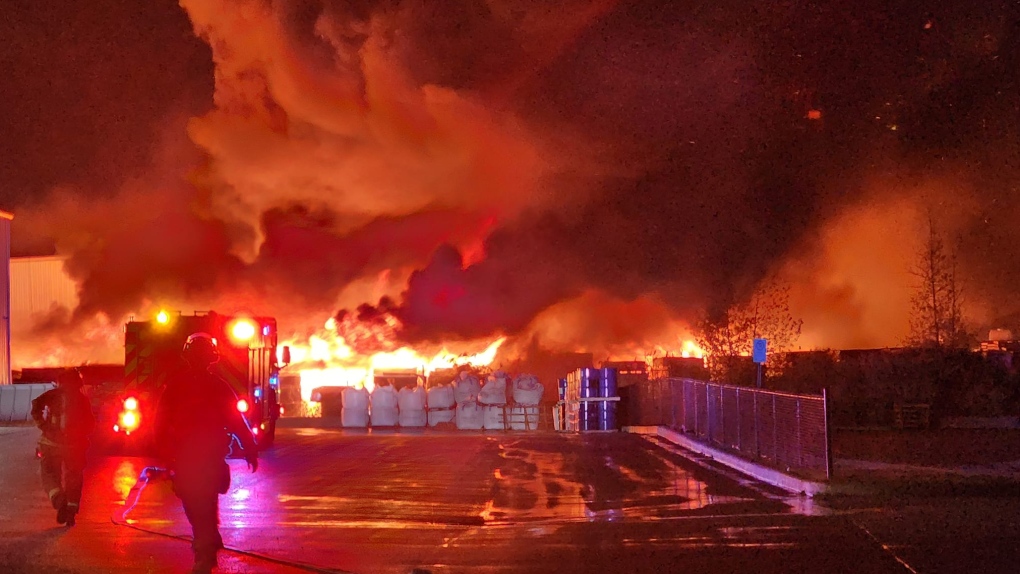 As crews continue to battle a fire at a rubber plant in Brantford, Ont., a public advisory has been issued for nearby residents to “keep windows and doors closed and HVAC systems turned off.”

Plumes of smoke filled the skies from Tuesday evening to Wednesday afternoon, with officials expecting crews to remain at the North West Rubber Ltd scene. on Henry Street for several days.

The Department of Environment, Conservation and Parks (MECP) visited the site overnight, and an air monitoring unit was assembled and dispatched to the scene, according to the City of Brantford. .

“Those with respiratory issues should avoid the area. The MECP will continue to monitor air quality in residential, commercial and industrial areas around the area of ​​the fire plume. The Brant County Health Unit has also been engaged and will work with the MECP to provide public alerts as needed,” the city said.

The Brantford Fire Department confirmed to CTV News that they were called to the scene of a fire at North West Rubber Ltd. on Henry Street around 8:30 p.m. Tuesday.

Smoke from a fire at a rubber factory fills the sky in Brantford on Wednesday, October 19. (Chris Thomson/CTV Kitchener)

Steven Kollatos witnessed the fire and said it looked like a scene straight out of a movie.

“It looked like something out of Lord of the Rings. It looked like Mount Doom, just glowing and smoking,” he said. “From over 500 feet away, you could still feel the heat coming from it.

“There was at least 50 feet of flames shooting aside and it was swirling with the smoke.”

Another witness, Mike Milks, said at one point the smoke was so thick and heavy he had trouble breathing.

“You could really see the fire from afar and as you got closer and closer, the thick black smoke was just rising above,” Milks said.

“It was unbearable, you could feel it. It was so thick and when I got home I was coughing,” Milks said.

On Tuesday, police and firefighters said there were no injuries, but employees were present at the time of the fire.

“At this time, the extent of the damage appears to be in the yards outside the building, but that’s all I know at this time,” Deputy Fire Chief Scott Pipe said.

“We take the piles apart and put foam on the product and the fire and put as much water as possible on the fire to cool it down and keep it from progressing.”

On Tuesday evening, Brantford firefighters added that they were not yet ready to investigate the cause.

Pipe said once the fire is under control, an investigation could begin.

“We are still in the operations phase actively engaged in the fire, so I don’t know how long it will take, if it will be hours or days at this stage,” Pipe said. “At this time the extent of the damage appears to be in the yards outside the building, but that’s all I know at the time.”

Brantford firefighters said it’s unclear how long they will be at the scene. Wednesday evening, the teams were still on fire, more than 24 hours after its start.

On Twitter, the police department said traffic in the Henry Street and Middleton Street area was being diverted.

“The public are asked to avoid the area and use alternate routes until further notice,” Brantford Police said in the tweet.

In 2019, a fire broke out in the same establishment near rubber mats on pads sitting in storage yard. The Department of the Environment conducted air quality testing and did not believe that short-term exposure would have any public health effects.

According to their website, Northwest Rubber manufactures rubber flooring made from recycled rubber tires.

The Brantford plant opened in 2010, but the company has been around since 1968.