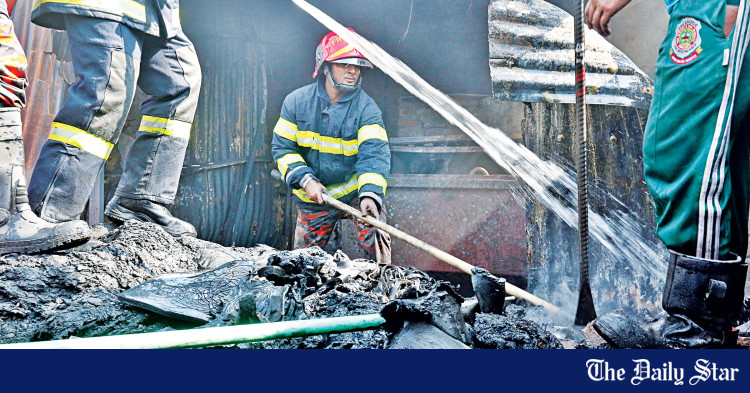 Firefighters extinguished pockets of fire at a shoe factory in Swarighat, in the capital. The fire, which swept through the factory early yesterday, claimed the lives of five workers. Photo: Anisur Rahman

Firefighters extinguished pockets of fire at a shoe factory in Swarighat, in the capital. The fire, which swept through the factory early yesterday, claimed the lives of five workers. Photo: Anisur Rahman

Five people were killed as a fire engulfed an unlicensed shoe sole manufacturing factory, concealed with flammable polymer and glue, in the Swarighat area of ​​Old Dhaka early yesterday.

All of the victims are believed to be factory personnel. The bodies, charred beyond recognition, were being kept in the morgue at Sir Salimullah Medical College and would be released to families after DNA testing.

For all the latest news, follow the Daily Star’s Google News channel.

According to police, firefighters and local sources, the fire started around 1:15 a.m. At that time, seven factory workers were sleeping on the first floor of the factory named Rumana Rubber Industry.

About fifty people work at the factory in two shifts. The building also houses a warehouse. All machinery was kept on the 6,500 square foot ground floor.

“I woke up hearing calls for help. I saw flames engulf the ground floor and the first floor,” Abdur Razzak, a laborer working at an adjacent rubber factory, told the Daily. Star. The man lives nearby.

Dinomoni Sharma, deputy director (Dhaka) of fire and civil defence, said they rushed to the scene immediately after being notified, but the fire had already spread inside the two floors.

“The fire spread quickly because there was a huge reserve of combustible polymer and glue. The plant has no license to operate. Its structure is faulty. Also, it had no fire safety equipment “, he declared to this daily newspaper.

Eight fire engines brought the blaze under control around 3 a.m. The bodies were recovered about an hour later.

Dinomoni said he found the five bodies lying one after the other. “They probably died after inhaling smoke. Later their bodies were burned beyond recognition.”

He said they were working to find out how the fire started. “The authorities will form a committee on Sunday [tomorrow] to take a look.”

Police suspect the victims are factory manager Kamrul Islam, 22, machine operators Aminul Mia, 36, Mirza Monir Hossain, 35, Abdur Rahman, 34 and Shamim Mia, 35. They have been missing since the incident and are feared dead.

Police Deputy Commissioner Jashim Uddin Mollah (Lalbagh Division) said he would hand over the bodies to the families after identification through DNA testing.

At the morgue of Sir Salimullah Medical College, family members of the five missing continued to cry and moan throughout the day.

“Abba called on the phone a few hours before the fire and told us he would visit us tomorrow [today]. He hadn’t been home for two months,” sobbed Nahid Hossain, the 12-year-old son of missing Monir Hossain.

Nahid, along with his mother and other relatives, rushed to Dhaka yesterday morning from their Kachua village in Chandpur.

Monir, father of two sons and a daughter, has worked at the factory for 17 years. He was earning around 20,000 a month.

Another missing man, Aminul Mia, is from the upazila of Manikganj Sadar. He had returned to work on Thursday after a month’s leave, said his older sister Bilkis Begum.

She claimed to have identified her brother’s body through his teeth. But authorities would only release the body after DNA testing.

Chawkbazar Police Station Deputy Inspector Nur Uddin said he heard witnesses say that two of the seven workers sleeping on the first floor managed to get out unharmed.

“The police were questioning factory owner Haji Rafiq,” he added.