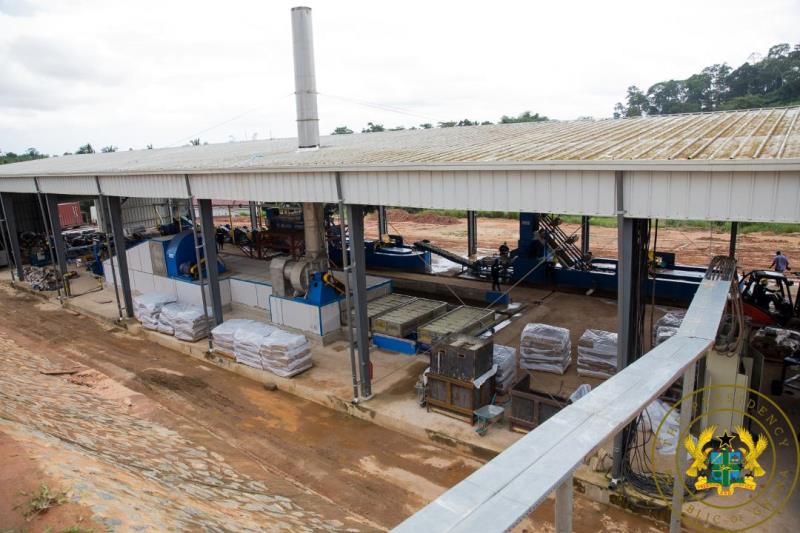 The Narubiz Rubber Factory is a 100% Ghanaian-owned company and currently has the capacity to process 20 tonnes of rubber per day for export to Turkey, Malaysia and Hong Kong.

The plant is expected to export a total volume of 6,240 tons of processed rubber per year, or $9.6 million in foreign exchange to the economy.

The project is owned by three shareholders, each of whom has a rubber plantation of 200+ acres.

The company sources its raw materials from the West, North West and Center regions, which will boost rubber production in these catchment areas.

The Ghana Commercial Bank provided a $1.38 million loan facility to the company out of the $2.1 million used to build the factory, under the One District-One Factory initiative, bet implemented by the Ministry of Trade and Industry.

Commissioning the factory at the start of his two-day tour of the Western Region, President Akufo-Addo noted that the establishment of the factory in the Western Region would encourage more Ghanaians to engage in cultivation. natural rubber in the catchment area, as well as other neighboring regions to supply the state-of-the-art plant.

These include vehicle tires, car seats and fan belts, which could be produced from the raw materials currently produced by the Narubiz Rubber Plant.

President Akufo-Addo commended business developers and traditional authorities in the region for their unwavering support for the project.

He also commended GCB Bank for providing the loan facility for the establishment of the plant.

He said the factory had benefited from import duty exemptions on government plant, equipment and machinery, which, among other incentives, were designed to enhance the competitiveness of companies operating under the scheme. One District-One Factory.

The government, through the Ministry of Trade and Industry, has supported Narubiz with an interest subsidy, an exemption on machinery and equipment, and a transformer for the smooth running of the business .