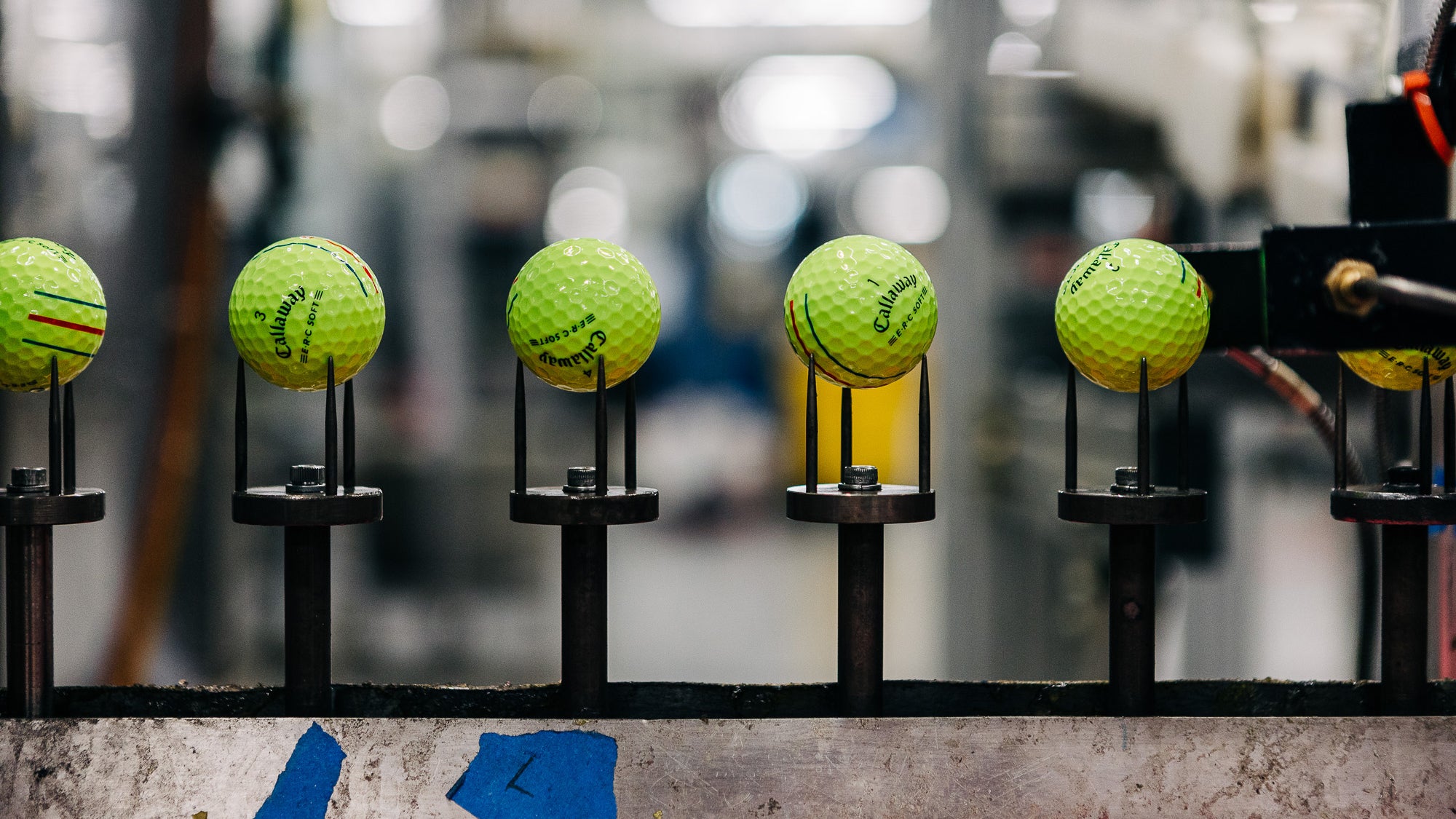 OPEN a golf ball made before the dawn of the 21st century, and chances are you’ll find a messy tangle of tightly coiled rubber bands clutching a hard rubber core. This elastic mass compresses when a club strikes the ball and rebounds when it launches into the air. Modern versions work around the same basic principle, but sit on an all-solid core of carefully engineered rubber compounds wrapped in meticulously measured layers of thermoplastic and urethane. Together, these layers determine how the ball will act as it exits the clubface.

Take, for example, Callaway’s Chrome Soft range of balls: Spheres promise relatively low spin and high driver and iron speed, which helps with distance without sacrificing control on corner shots around the green. As Callaway has produced these premium balls from its factory in Chicopee, Mass., it has become one of the fastest growing golf ball manufacturers in the world. There, we took a look at the elaborate chemistry and engineering that goes into these little orbs before buying them and planting them in the water hazard.

↑ The process begins with a proprietary blend of synthetic rubber and other powdered compounds flowing through the three-stage gravity-fed mixer. Engineers meticulously monitor the process, which applies heat and pressure to the materials, combining them into a firm rubbery mass.

↑ As a uniform substance, the material falls onto large metal rollers which cool it and create a sheet. A worker then cuts the flattened substrate by hand. From there, parts are stored, while small samples make their way to Callaway’s on-site lab, where technicians test the batch for compression, among other key variables.

↑ Callaway cures and dries the sheets in a temperature-controlled room that is cooler than the rest of the factory and has very low humidity. Each batch is carefully labeled with its manufacturing details and chemical properties. The material is also color coded according to the ball it is intended for. Blue, for example, is found in the Chrome Soft X LS balls. These promise extra-low spin, which results in faster speeds across the clubface and more distance.

↑ Once the sheets have hardened and dried, the shaping process begins. Cut into strips and reheated to become malleable, the material enters a machine similar to the Play-Doh extruder you had when you were a kid – only this paste is very hot and a rotating blade cuts a part several times per second. The resulting small logs are called preforms, and Callaway workers weigh them regularly to ensure the extruder produces the right amount of material to create the core of a bullet.

↑ The preforms enter a molding press, which heats them and applies up to 2,000 pounds of pressure. When they form into identical spheres, temperature and compression cause a chemical reaction that locks in the performance characteristics of the cores. This gray material is found in the Chrome Soft X balls, which are aimed at advanced players with faster swings, who want less spin from the driver but more on the iron shots for added control. From there, the orbs go through a grinding process, which perfects their size and creates a slightly rough texture that helps the outer layers adhere.

↑ Every golf ball has at least one mantle level, a thermoplastic layer that sits between the core and the cover. Inside an injection molding machine, the cores sit on pins, allowing the device to surround them with one or two layers of mantle. The balls then return to the grinder for size and texture adjustments.

↑ The balls go through another injection molding process to achieve the characteristic dimpled urethane cover of a golf ball. After this step, Callaway uses a secret three-dimensional X-ray process to inspect the inside of each ball without opening it. This ensures that the center of gravity exists in its actual center; if it is slightly off, strange or unpredictable flight paths will result.

↑ A large rotating cartridge filled with ceramic pebbles acts as a rock tumbler to remove any excess material from the outside of the balls. They’ll spend several minutes getting banged before heading to a treadmill for a wash and rinse before heading to the printer. Fresh out of the cup, the balls look like the finished product, but they don’t feel like it: the matte exterior lacks the familiar glossy glaze.

↑ Before being adorned with their logos, the balls go through another cycle of quality control. A machine rotates each in front of an array of six cameras and a ring of LEDs. This setup can spot any flaws on the surface, such as cuts, nicks or scrapes, that the smoothing and washing process can sometimes leave behind. If the system detects an anomaly, a human inspector intervenes.

↑ Each Callaway line has its own specific mark which is applied to nearly finished balls. A bead of flexible rubber picks up the ink and precisely dabs it onto each nearly complete sphere. Some will simply feature the Callaway logo with a number and model name, while others, like the Chrome Soft Triple Track pictured above, have more intricate markings like lines to guide putts.

↑ After the print is applied, each ball receives a coat of clear primer to protect the surface and the ink, and a final polish coat that provides the familiar shiny surface. To ensure even coverage, the balls rotate at high speed on three-pronged forks, allowing spray guns to apply coatings from above and below.

↑ With the varnish applied, the balls are complete. They are inspected again to guard against inconsistencies, then packed by the dozens and sent to stores and professional shops around the world. The finished ERC softballs pictured here include a compound in the cover called an impact modifier; Developed by materials company Dow, the coating maintains the ball’s soft feel while making the outer cover more durable against scrapes and cuts.