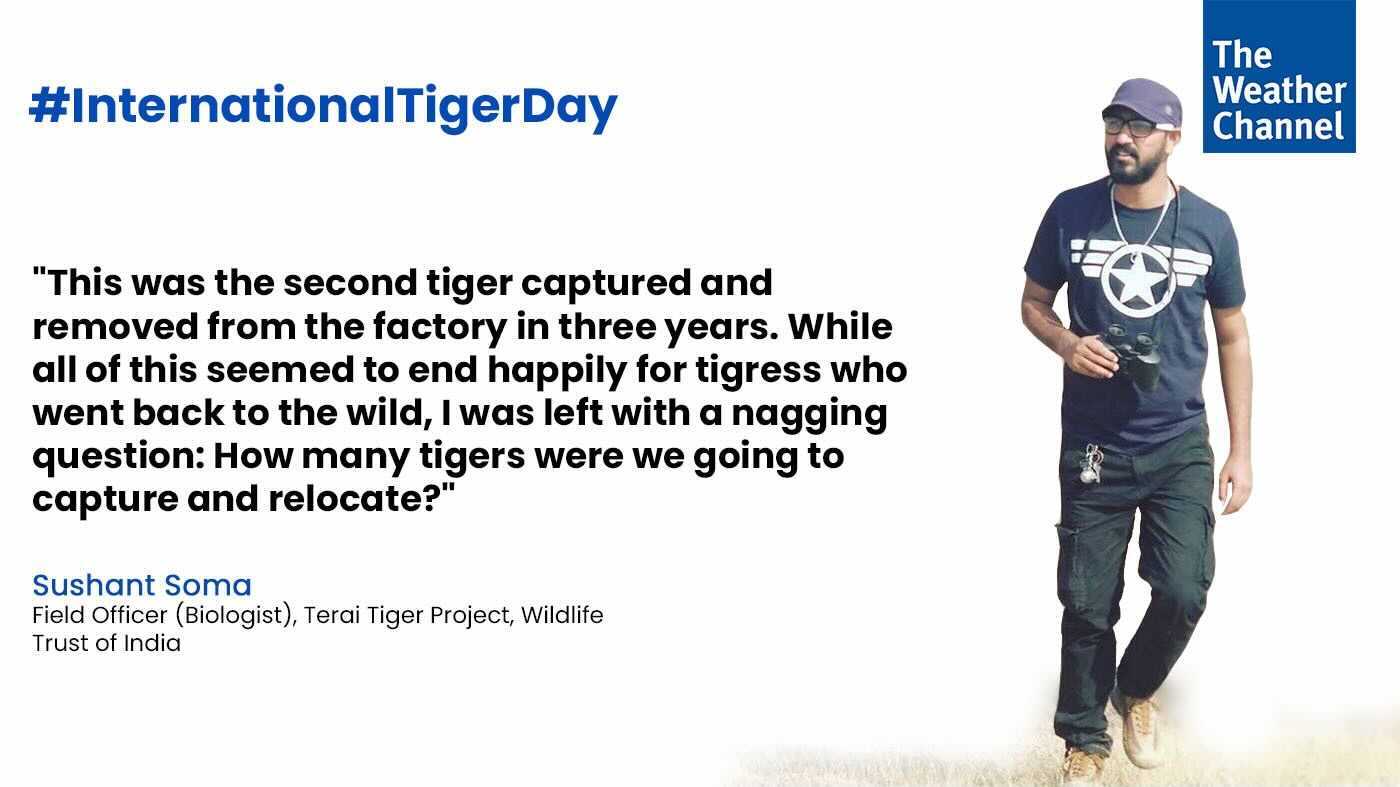 The life of a wildlife biologist may seem alluring from afar, but it’s often not exactly like in fancy documentaries. Work as one, in the Wildlife Trust of India (WTI) Tiger Project, I spend most of my time tracking down the two most common big cats in India: the Bengal tiger (Panthera tigris) and the common leopard (Panthera pardus).

Here in the state of Uttar Pradesh, where the project is based, my job is to take action as a member of the rapid response team – which the project operates to help the forestry department. to alleviate conflict between humans and big cats – whenever a conflict situation arises. I observe and deduce telltale signs from incidents and little clues that animals leave behind, their size, age and sometimes also their behavior. The camera traps I set up in such locations help correct or further corroborate these inferences.

Often times in efforts to mitigate conflict situations, especially when a large cat has inadvertently (our long-term data shows that most tiger and leopard attacks are accidental in nature) attacked a human – efforts are made to immediately capture and move the animal. However, in recent years our approach has been to promote the “safe passage” of animals engaged in conflict.

And that’s where I come in. My job is to understand if the incident was accidental in nature, how these animals seem to behave, and whether providing safe passage is a viable option. Again, this can all sound very alluring, but trust me, it is often not an easy task to undertake. Each situation is unique and all are equally delicate – I have instilled the habit of not assuming and starting over every time. Each operation teaches me new things about the behavior of these big cats. A recent case I attended in Bareilly has so far been the most difficult operation I have tackled, and I am trying to elaborate on my experiences here.

Bareilly is a typical town in Uttar Pradesh, northern India, an unremarkable concrete jungle, surrounded by vast expanses of sugar cane and mustard fields as far as the eye can see, dotted with a cluster of households which form a village or hamlet. The large sugarcane crops throughout the state have proven to be crucial for the movement of big cats like tigers and leopards.

Not surprisingly, a discrete 1,200 ha area of ​​an abandoned two-decade-old rubber factory – now overgrown with natural vegetation and populated by wild prey species such as the blackbuck and the Nilgai – has become the refuge of a wandering tigress in 2020. t really a risk to people since it relied almost exclusively on wild prey here, the perceived fear aroused by knowing of a tiger residing in your backyard was reason enough for the Forestry Department state decides to capture and relocate it. They started a search operation in March 2020 but to no avail.

The tigress appeared to be very elusive, exploiting the multitude of worn structures, tunnels and buildings to escape her potential captors. Maybe she knew they were after her, maybe it was just second nature. As (bad) luck would have done, she accidentally wound up injuring two people one day as she attempted to venture out of the premises. This is when our support was called upon. After all, our team had caught another adult male tiger in this same abandoned factory just a few years ago!

It was at the end of May 2021, almost after a year, this tigress had remained elusive to prying eyes, with only an occasional image captured on camera traps when I was asked to take care of the case. Barely recovered from a severe period of COVID-19, I was faced with a dilemma. I was too exhausted to go, but the deal was very enticing. And I had not been part of the previous case in 2018. So it was decided, and without further deliberation, I packed my bags.

In Bareilly, I met my field assistant Palu, and together we went over checking some old camera trap images and mapping the direction and time of this tigress’s movements. Drawing conclusions from this, I started setting up my camera traps and recording his pug marks from 4 a.m. to 10 a.m. and then again from 3 p.m. to 7 p.m. Sometimes we thought we saw her – most often we felt like she saw us – because she decided to change course to avoid us.

Several days passed, but we understood little of his movements. In mid-June, a trend seemed to emerge. In the eastern corner of the premises there were several massive rusty old tankers surrounded by thick vegetation of thorny brush. Almost all of his daily meanders around the premises seemed to start and end at this point. Consulting my boss, we deduced that this must be the place she uses to rest during the day. Tigers by nature are nocturnal: they begin their activity at sunset and lie down again early in the morning.

I quickly moved a bunch of my camera traps there, and voila! our guess was correct. Once that was sorted out, on June 16, I decided to do something that scared me. With my field assistant and a few rangers, I decided to venture into the thickets where she regularly seemed to disappear, because without knowing exactly where she was taking refuge it would be nearly impossible to even attempt to capture her.

We waded through the thorny vegetation for a while, then decided it was a wasted effort and we were about to turn around when the alarm cries of a herd of monkeys in front of us caught us. alerted to the possible presence of the tigress. It is fascinating to see how, these rhesus macaques (Macaca mulata) are still able to recognize a predator, with so many generations of monkeys never meeting one!

No sooner had we heard the calls, we heard rustling further and thought that the tigress could have moved forward being detected by the macaques. So, apprehensively, we waded around until we came to an opening near the tanks. Walking as gently as we could, we began to observe the openings on the tanks – small circular inlets one and a half feet wide at a height of 5-6 feet on each tank. One particular opening caught my attention. All the openings on the other tanks were screened with cobwebs, except this one. Without trying our luck any further, we quickly set up a camera trap facing this entrance and quickly left out of the thickets.

I spent a sleepless night, with incessant fleeting thoughts about the tigress, her whereabouts and the validity of my intuitions.

Tigress in the tank

Early the next morning, I rushed to the site – frantically fumbling with the camera trap to check if anything had been captured. Then, seconds later, triumphant smiles erupted across all of our faces as we watched the brief footage of the tigress walking effortlessly into the tank by the entrance.

The following hours passed in a frenzy of action in total silence. Large caliber nets blocked the entrance and Palu, our scout, climbed to the top of the reservoir to check if the tigress was indeed inside. Palu’s excited gaze was enough to indicate that she was fine inside. Once confirmed, a cage was set up at the entrance to try to lure her inside to avoid chemical sedation. But the effort was in vain, and the next day a massive tranquilization operation was launched.

Dr Daksh Gangwar, a former member of the WTI team, now a veterinarian in the Pilibhit Tiger Reserve, successfully sedated her. An earth moving machine that had been brought in earlier in the day was deployed to tear through the rusted wall of the tank. She was quickly placed in a transport crate and taken to Dudhwa Tiger Reserve as directed by senior Forestry Department officials, where she was successfully released back into the wild.

While this all seemed to end happily for the tigress who returned to the wild, I found myself with a nagging idea. It was the second tiger captured and removed from the plant in three years. Was the factory now tiger-free for good? What if another tiger ventured into this space? How many of them were we going to capture and move?

The fight for space

Tigers, like most predators, need space to thrive, and those spaces need to be connected so that scattering tigers can do so with minimal interaction with humans. Uttar Pradesh’s sugarcane fields coupled with isolated refuges like the abandoned Bareilly rubber factory with a large prey base, provide such connectivity. They allow tigers in search of good habitat to travel great distances to survive.

Perhaps then, we only need to promote a better understanding of these big cats and to increase our own tolerance for them, especially when using human-dominated landscapes. Our work is essential to ensure the safety of animals and people and to learn to coexist in their own spaces. The struggle is real on both sides.

Sushant soma is a wildlife biologist who works with the WTI Terai Tiger Project. Although he started his career in computer engineering, Sushant has always been interested in working in the field of wildlife. Therefore, he pursued and obtained his M.Sc. degree in Wildlife Conservation in September 2019 and soon after, joined WTI.

This article is a guest column reflecting the views of the author and does not necessarily represent the official views of The Weather Channel.