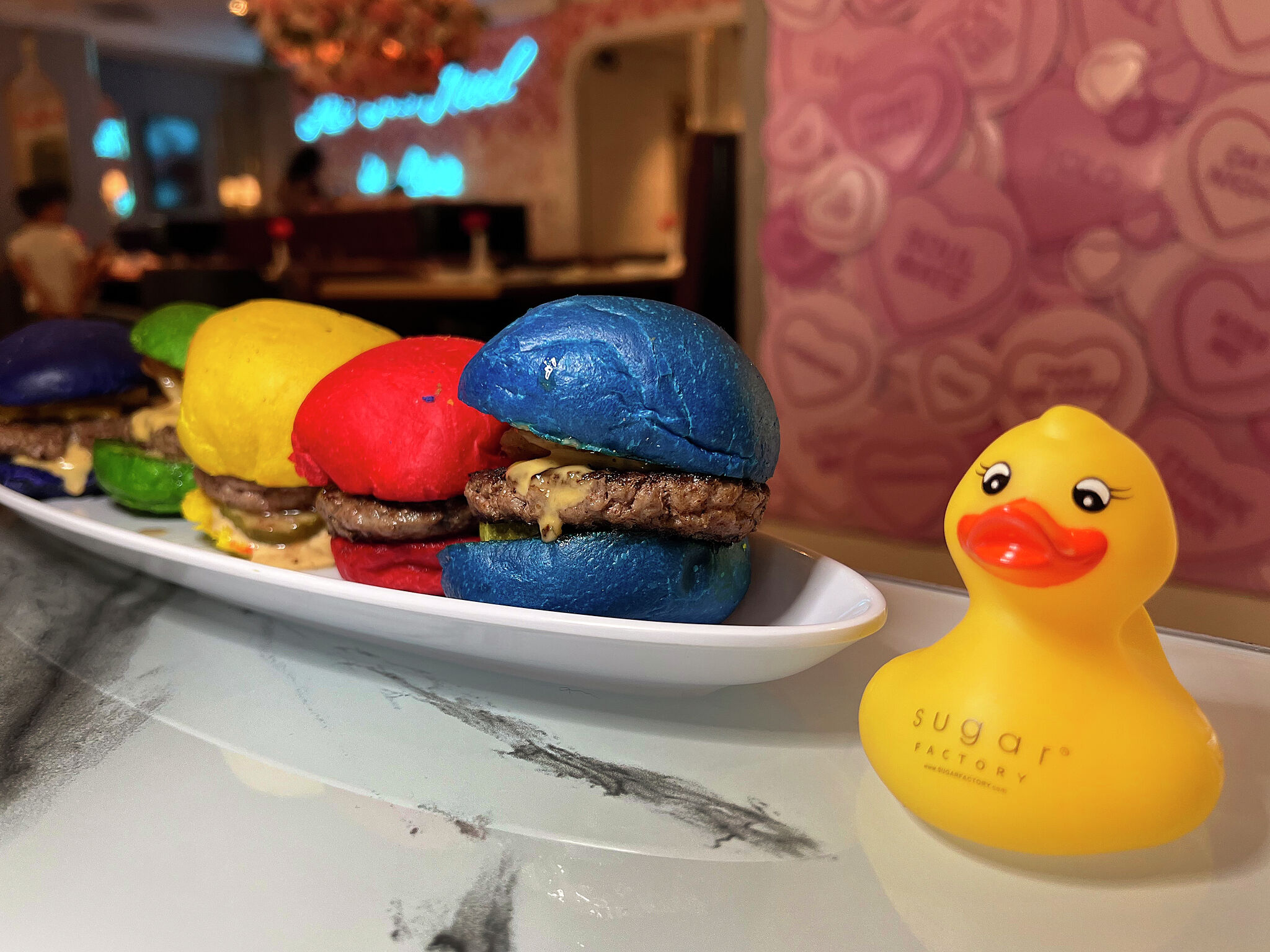 With a $150 gold-leaf burger, $46 cocktails and $20 milkshakes, the Sugar Factory American Brasserie photobombed the River Walk this summer, a celebrity bar and grill bred in pairs: twice as flashy, twice as sweet, twice as ready for her Instagram close-up.

But what is this mathematical law? When you multiply by zero, you always get zero. A billion times zero is still zero. Nothing can change that. No gold leaf, no dry ice, no 50 shades of sliding buns, no 50 Cent. This doubles at Sugar Factory.

Sugar Factory was born in Las Vegas in 2009 and has multiplied to 30 locations in America and abroad, in hotspots such as Miami, New York, the Bahamas and Dubai, but also Mississippi and the Mall of America. And now San Antonio, stuck between a convenience store and a Hooters.

The entrance shines like a movie theater marquee, the interior a big-budget production of upholstered banquettes, subway tiles, chandeliers, a life-size tree flocked in phantom white, and an Instagram wall of pink roses with “All You Need Is Love” mounted in color changing neon.

The outdoor patio has a floral ceiling and a view of the River Walk, and there’s a gift shop where you can buy high-quality lollipops and rubber duckies and view photos of Snoop Dogg, Nick Cannon and Kourtney Kardashian ordering exactly what you ordered.

On ExpressNews.com: The 10 best restaurants on the River Walk

Celebrities are jumping everywhere. The photo gallery framing the bar menu is an alphabet soup of ABCD athletes, rappers, actors and celebrities, with cocktails “designed and tasted” by superstars such as Dwayne “The Rock” Johnson, Bruno Mars and Pitbull. It’s Planet Hollywood for the 21st century, reminiscent of the overheated days of the Stallone-Willis-Schwarzenegger trifecta that landed briefly on the River Walk in the ’90s.

But strip out the star power, food coloring, and $99 King Kong Sundae, and you’re left with just a mid-chain restaurant, and not a particularly good one.

Sugar Factory seems to aspire to be something more than a bar with a solid ice cream program. But aspiration is not the same as inspiration, and too much of it tasted like desperation.

With more than 60 dishes, the menu has crossed genres like a fidgety toddler, flipping stir-fries, Italian pasta, “Monster” burgers, steaks, wings, fish and chips, chicken and waffles, even lobster tails.

Even at $26, it seems everyone is ordering Rainbow Sliders, mini cheeseburgers on buns stained with a regal array of Pantone colors, like sliders in a castle. White Castle, though not as good, served five on a plate with a complimentary rubber ducky. Maybe I should have ordered the duck instead.

The “chicken” part of the chicken and waffles was inedible, as hard and shiny as a wax museum prop, too burst and chalky for any amount of maple syrup to hold. A 12-ounce New York strip loin has pulled off the rare art of being sloppy and dry at the same time, a joyless slice served on a plastic cutting board with a deep-fried, starch-laden log they are proud to call it a “Dirty Hash Brown”. ”

All I tasted in a stir-fry called Firecracker Shrimp was shrimp that sat on the fireworks too long, the spice a smokescreen to cover the overcooked bell pepper and seafood funk.

It’s not like everything was tragic. These days everyone is making Buffalo wings and a Buffalo chicken sandwich. The same goes for Sugar Factory. I won’t waste time dissecting everyday spaghetti and meatballs or chopped romaine salad with a piece of grilled salmon. They were fine. But they felt out of place, ordinary, as if someone had transported Applebee to Marie Antoinette’s living room.

If I had to eat at Marie’s I would choose the Big Cheesy, a half pound burger piled high with macaroni and cheese and bacon. Or a plate of brie baked in puff pastry, served with jam and apple slices as if invited to a whole other party. Or the club sandwich, a good pile of turkey, avocado and cheese on toast. But I don’t put on my nice shirt to do it at Sugar Factory.

Nor am I going to tighten my candy necklace and be offended that Sugar Factory charges $20 for a milkshake. Or $46 for a celebrity cocktail. That’s what Sugar Factory does. It’s their specialty. But specializing in something doesn’t mean you’re particularly good at it, no matter what you charge for.

The West Coast Sunset Goblet – “designed and tasted by Kendall Jenner” – came with a floor show, the waiter assembling the giant glass one shaker at a time to build colors and activate dry ice, fog swirling around the Day – Glo gums at the top. But it tasted like punching a kegger, an innocently sweet fruit juice that hits you when you’re not looking.

If you’re looking to spend less, there’s a range of splashy drinks and sweet martinis on the other side of the menu for around half the price. Peace, Love & Harmony was made with Hpnotiq Harmony Fruit Liqueur, and it tasted just like West Coast. They call it a margarita. (San Antonio called: they want you to stop calling it that.)

Want to spend even less? Any drink can be ordered non-alcoholic for a few dollars off. I don’t know how it works, but that’s the price Sugar Factory pays for being “family-friendly”. And $39 is the price you’ll pay for your child’s fruit punch bowl.

Service was good at Sugar Factory, and not just when the staff got together for “Happy Birthday” and rocked the house. And that should be fine, because Sugar Factory adds a “mandatory 20% service charge” to your bill, promising to distribute 17% of that to staff. The rest is used to “cover expenses”. If you’re already tipping 20 percent, that’s an eyeroll. If you are the staff, where is your remaining 3%?

But you probably came to Sugar Factory for dessert, mostly. And when I say they’re selling a $20 shake, they’re stacking the adjectives like a stack of $1 bills stacked exactly that high. The Tie Dye starts with a mug of chocolate-covered beer sprinkled with Skittles and Pop Rocks. Then there’s vanilla ice cream, vanilla syrup, whipped cream, more Pop Rocks, a candy necklace, and cotton candy skewers like psychedelic pigtails. Cookie Monster? Much the same, except with chocolate chip cookie chunks, cream cookies, and a big blue donut. And a cupcake.

Wow. Seems like it’s all worth it, right? Except no. Both tasted like melted birthday cake icing, a sweetness as overwhelming as the sniff of artificial sweetener, leaving a sticky aftertaste of a drink that, when it’s all piled up, doesn’t doesn’t really represent a lot of milkshake.

Like so many at Sugar Factory, the milkshakes were shiny and sweet on the outside, but hollow on the inside, symbolic of the idea that if less is more, then too much is never enough. Except when it is, and then it’s Sugar Factory.

Your site doesn’t have any tags, so there’s nothing to display here at the moment. 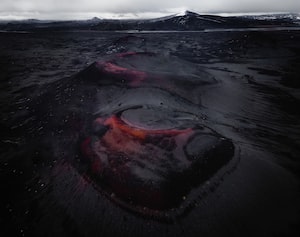