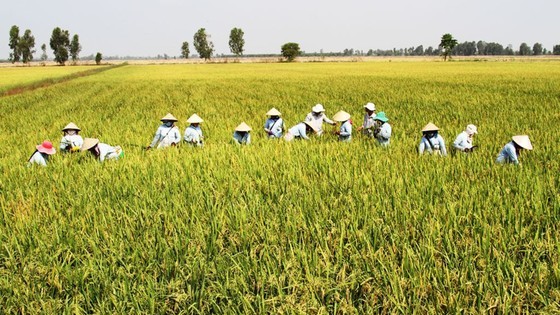 From the beginning of 2022 till now, according to the General Department of Vietnam Customs, nine agricultural products with an export turnover of more than 1 billion US dollars include coffee, rubber, walnut cashews, vegetables, rice, pangasius and prawns.

The agricultural sector, in general, recorded an export turnover of nearly 28 billion dollars, up 13.9% over the same period. Vietnamese agricultural products are displayed in 180 markets around the world, including many demanding markets such as the United States, Japan and Europe.

However, from the beginning of the year until now, the responsible agencies have also discovered many fruit and vegetable crops with residues of pesticides or chemical fertilizers.

Up to 50% of food and vegetable samples contained chemical residues and 40% of fruit samples, according to the food monitoring agency which recently took samples from agricultural wholesale markets in Ho Chi Minh City. sea ​​salt contained heavy metals.

Many provinces and cities across the country have implemented cleaner production and aquaculture, not only by Vietnamese standards, but also by many global standards.

Farmer Ba Dan from Ly Cong Dan Street in Vien An Dong Commune in the Mekong Delta Province of Ngoc Hien District of Ca Mau said that after selling shrimp in previous years, he does not care. quantity of prawns but money. However, since he participated in the shrimp farming model to international standards, he said he had to keep the voucher carefully and see how many he had. He explained that if he reached the required quantity and quality, the purchasing company would pay him an additional sum.

In recent years, seafood processing and export enterprises in Ca Mau province in the Mekong Delta have been coordinating with the Forest Protection Management Council, local authorities and people. to set up projects on the value chain of shrimp farming – coastal forests.

Currently, Ca Mau has about 27,577 ha of shrimp and forest farms. In particular, the area of ​​ecological shrimp farms certified by international organizations is more than 19,000 hectares of shrimp – forest according to international standards such as Naturland, EU Organic, Canada Organic, Selva Shrimp, ASC and BAP. Shrimp raised by this method are favored and valued by many markets, so processing and export companies often offer prices that are 5-10% higher than those obtained by other traditional methods.

Additionally, the companies will help farmers pay for forest environmental services and support high-quality seed in the certified shrimp forest area. Farmers in these special areas not only raise black tiger prawns, but they can also earn extra income by raising crabs, fish and blood cockles. It is estimated that each household can make a profit of 80 million VND per ha.

According to the Department of Agriculture and Rural Development of Ca Mau, shrimp farmers have a stable income because they do not need to spend much on food as they use natural food sources. In addition, the companies also help shrimp farmers pay for forest services and benefit from logging, so that farmers can earn more.

Mr. Phan Hoang Vu, Director of Agriculture and Rural Development Department of Ca Mau, said intercropping shrimp in mangroves is a good mechanism, ensuring harmonious benefits between economic development and forest protection. . This is considered the most effective solution to help restore, protect and develop forests in the coastal provinces of the country.

Mr. Dao Van Minh, Deputy Head of Phu Thanh Grapefruit Production Cooperation Group in Quoi Son Commune, Ben Tre Province, said that for years, pomelos have been regarded as key fruits for export, which has helped local farmers lift themselves out of poverty and recover. stopped.

Local farmers strictly follow the recommendations of the agricultural sector when using fertilizers and pesticides. On average, farmers fertilize the pomelo orchard 12 times a year, including six times with organic fertilizer and six times with chemical fertilizer.

According to Minh, farmers are now more advanced and knowledgeable in agricultural production, so even in normal production or applying VietGAP, they do not overuse pesticides. Many of them have realized that if they abuse pesticides or chemicals, they are the first affected, so they are very careful when using these chemicals.

Elsewhere in Dong Thap province in the Mekong Delta, director of the Binh Thanh Agricultural Services Cooperative, Nguyen Van Doi, said that on average farmers spray pesticides to prevent and kill pests, weeds, snails 8-10 times and fertilize 4-5 times per crop. However, Mr. Doi asserted that the spraying should be stopped in the last phase before harvesting the rice 20 days, to ensure that the drug residue does not remain in the rice grain. With this method, the rice grains always meet VietGAP standards.

According to Chau, the provincial agricultural sector is focusing on guiding farming methods using pest-resistant varieties, healthy and disease-free seedlings, field sanitation, balanced fertilization and the use of baits. to attract insects and natural enemies.

At the same time, the province is implementing programs and projects to help companies, cooperatives and farming households to produce and certify production according to safety standards such as VietGAP, GAP

In addition, the local agency has updated farmers and agricultural cooperatives on the monitoring and control of chemical residues in agricultural products through the collection of samples for qualitative analysis and quantification of chemical residues on agricultural products, including fresh fruits and vegetables, strawberries and berries. Thanks to the timely update, cooperatives, companies and farmers do not use banned chemicals but biological drugs, herbs and drugs with low toxicity, included in the list of drugs whose use is allowed In Vietnam.